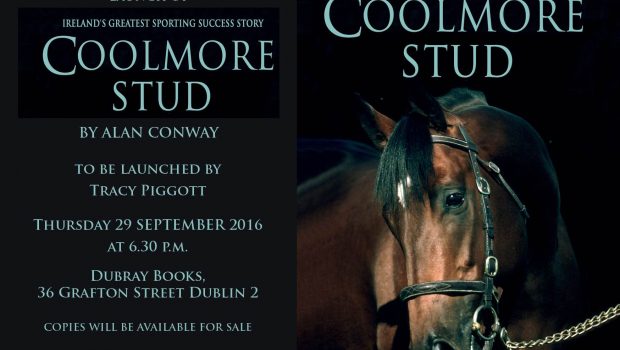 At 3.10pm on the lush greens of Chantilly racecourse on the first Sunday of October, the latest chapter in Coolmore’s remarkable history was written, a chapter even Aidan O’Brien didn’t even dare allow himself believe could happen. However, the master of Ballydoyle, though his usual reserved self in the post-race celebrations, must have been welling up with pride as Found has just led home Highland Reel and Order of St George in the Prix d l’Arc de Triomphe for a Coolmore 1-2-3. 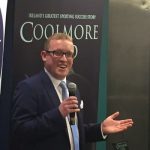 As the book is launched in Grafton Street’s Dubray Books, Alan exhibits his customary quiet reserve as the incomparable Tracey Piggott, daughter of legendary jockey and Coolmore stalwart, Lester Piggott, waxes lyrical about her father’s experience at Ballydoyle. However, like Mr O’ Brien in the green fields of France on that glorious Sunday afternoon, the overwhelming sense of pride and achievement is plain for all to see.

The book itself is nothing short of a triumph. From the innovation and sheer determination of Coolmore’s original heroes Vincent O’ Brien and the Syndicate, to the current unstoppable force that is the alliance between Aidan and the John Magnier/Michael Tabor/Derrick Smith triumvirate.

From the straight talking, no nonsense Lester Piggott and the controversial Kieran Fallon, to the gentleman Mick Kinane and the sport’s current sensation Ryan Moore, the author demonstrates that while the Ballydoyle hotseat is much coveted, sometimes heavy lays the crown.

There are many forays into bloodstock and breeding, a subject I am still astounded by Alan’s knowledge of, not just in Europe but in America and Australia. The illustrious bloodline of Northern Dancer is meticulously explained, with his progeny, which include Galileo, Montjeu, Sadler’s Wells and Danehill, continuing to dominate the world’s best flat races.

Indeed everyone associated with the success of the operation gets their due credit, from those who have dedicated their lives to Ballydoyle to those who are just in the infancy of their careers.

For lovers of racing, the book provides some trips down memory lane with an eye to the future. For fans of breeding, there is a veritable smorgasbord of bloodlines to get stuck into. Even for the complete novice, the book is designed to be an engaging read that encourages the reader to enjoy the thrill of the sport in a manner that is both accessible and entertaining.

A fascinating read, by an exceptional author, about Ireland’s greatest sporting institution. It’s another in a long line of tremendous triumvirates for the Coolmore operation. So here’s to the next chapter!